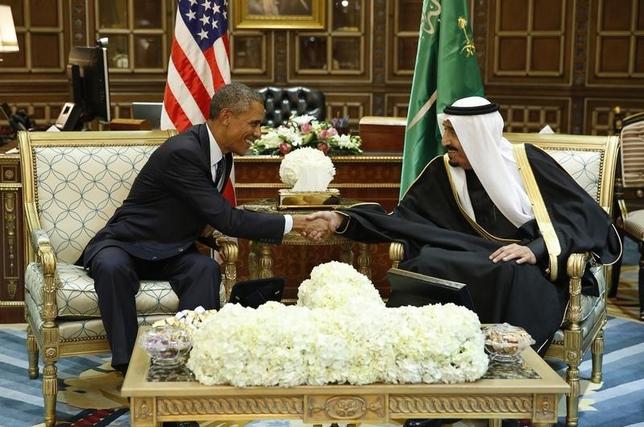 Saudi King Salman will meet with U.S. President Barack Obama in Washington on Friday to seek more support in countering Iran, as the Obama administration aims to use the visit to shore up relations after a period of tensions.

The visit is the king’s first to the United States since ascending to the throne in January, and comes after the United States agreed to a nuclear deal with Iran in July, raising Gulf Arab fears that the lifting of sanctions on Iran would enable it to pursue destabilizing policies in the Middle East.

The U.S.-Saudi relationship has suffered strain because of what Riyadh sees as Obama’s withdrawal from the region, a lack of direct U.S. action against President Bashar al-Assad in Syria, and a perceived U.S. tilt towards Iran since the 2011 Arab uprisings.

“Both nations are close strategic partners in spite of their differences, and both states need each other,” wrote Anthony Cordesman, a Middle East analyst at the Center for Strategic and International Studies think tank in Washington.But he said the Obama administration “needs to reassure its allies and reinforce its commitment to that partnership,” especially given Saudi concerns about the Iran nuclear deal.

Salman skipped a Gulf Arab summit at Camp David in May, a move widely seen as a diplomatic snub over Obama’s Iran strategy – though both governments denied that interpretation.

Obama secured a political victory this week, when enough Senate Democrats threw their support behind the Iran nuclear deal to sustain a threatened veto of any congressional vote of disapproval.

Critics say the deal will empower Iran economically to increase its support of militant groups in the region.

Saudi Arabia and Iran are opposed on a number of regional issues, especially the 4 1/2-year-long Syrian civil war and unrest in Yemen, where a coalition of Arab states led by Riyadh – assisted by the United States – are targeting Iran-allied Houthi forces.

The Obama administration is focused on providing assistance the president promised at the Camp David summit, including helping Gulf states integrate ballistic missile defense systems and beef up cyber and maritime security.

Despite the tensions, the two countries depend on each other on crucial security, business, and economic issues.

Saudi Arabia remains the world’s largest oil exporter, and its commitment to pumping oil freely despite a recent price decline has helped contribute to sustaining the U.S. economic recovery. Obama and Salman will discuss global energy markets during the visit, the White House said.

The Gulf state is also in advanced discussions with the U.S. government about buying two frigates based on a coastal warship that Lockheed Martin Corp (LMT.N) is building for the U.S. Navy, a deal valued at well over $1 billion.

The sale would be the cornerstone of a long-delayed multibillion-dollar modernization of the Royal Saudi Navy’s Gulf-patrolling eastern fleet of aging U.S. warships and would include smaller patrol boats.